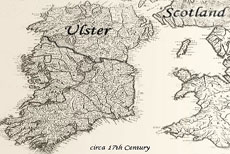 Thurs 8/25 – 4-9:00 PM – Plantation cocktails. Where and when was the first plantation system(s) born?  The migration of the Scotch-Irish (also called Ulster Scots) and eventual colonization in the New America was a continuation of England’s expansion that began with King James II and his father, King Charles I of England, who established the first plantation systems in Ireland circa 1583 for the “Munster Plantation” and circa 1600 for “Plantation of Ulster.” This initial expansion through a plantation colony strategy is now acknowledged by historians as the practice ground for the colonization of other non-western countries. The lowland Scots migrating into Northern Ireland and mixing with the Northern Irish population became known as “Ulster Scots” or Scotch-Irish.” The British strategy called for the military to make initial entry into Ireland and secure it from the Gaelic-Irish who had grown increasingly violent. They then called for the establishment of homesteads to those properties seized at no cost or low cost to the homesteaders. Situated near the depressed Western Lowlands of Scotland, a short journey away by sea, the Plantations were known as “the bridge between the two countries.” Scotsmen moving into Ireland built up profitable linen and woolen and other craft productions; these came to concern the English, who increasingly questioned any issue that might lead to rebellion and independence. Thus, they established policies that persecuted the Ulster Scots in religion, politics and business. The younger sons and daughters of these Ulster Scots became less accepting of the British tyranny than their parents had been, and began to migrate to American in small numbers by the late 1600s.

In 1685 King James II began demanding acceptance as head of the church, and those not accepting were persecuted and some deported to the American Colonies. Political tensions had been mounting in Ulster and finally led to the crucial exit from Ireland of numerous Scotch-Irish. The greatest exodus occurred from 1718 until 1728, with more than 4,200 souls headed for the colonies. When famine struck Ulster in 1740, the rush to emigrate reached 12,000+ annually. The decision to leave the old world for the new world, although born out of desperation and strife, would prove to be positive and advantageous for the bold adventuresome Ulster Scots in America. A great book Albion’s Seed Four British Folkways In America discusses the traditions & culture they brought with them and later woven into their American lives.