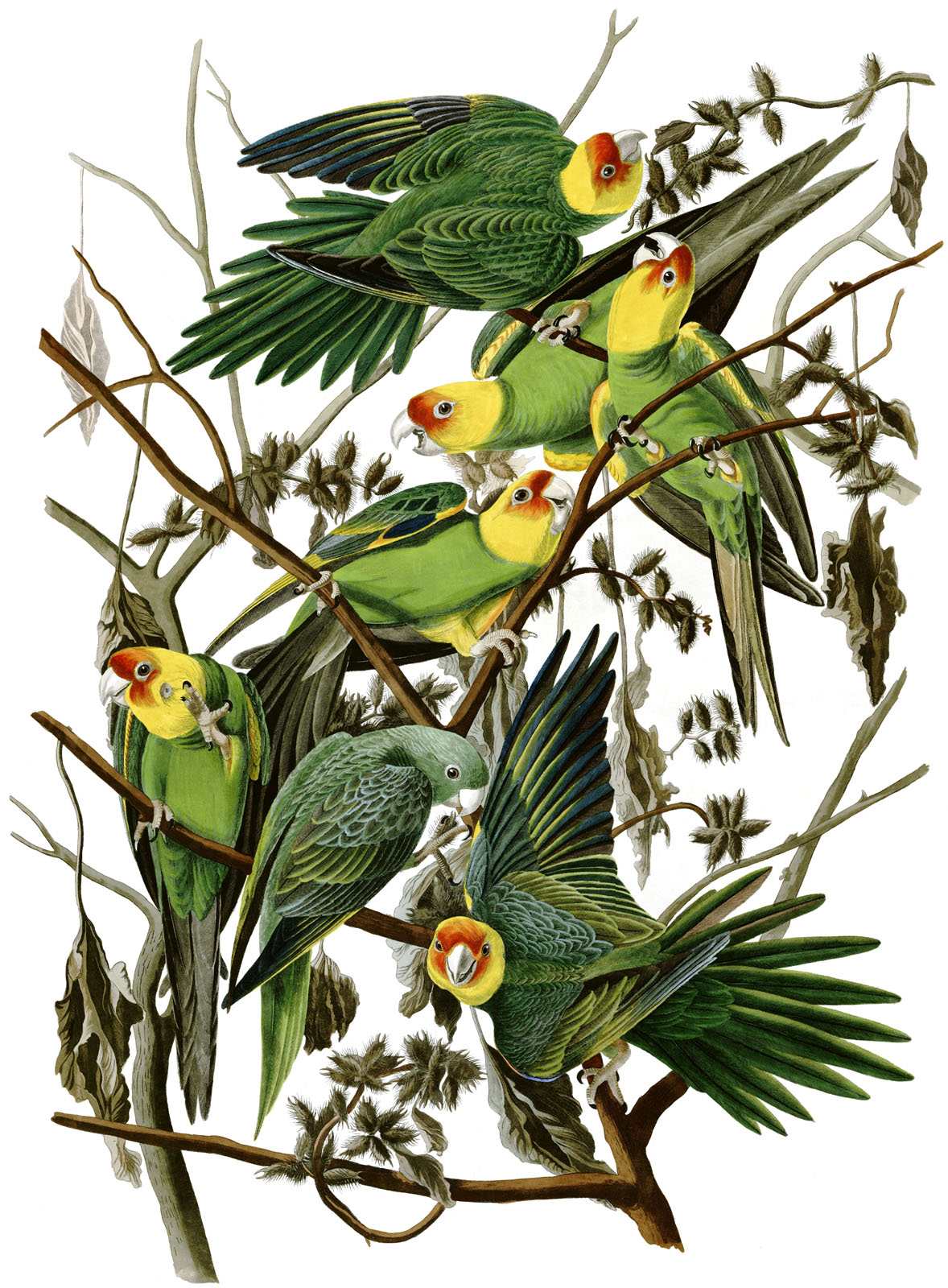 Carolina Parakeet…American Wood Bison…Eastern Elk…Ivory Billed Woodpecker… Carolina Panther….. When early pioneers entered the mountains of western North Carolina they found trees filled with the chipper sounds ringing from bright yellow heads and chartreuse green bodies of the native “Carolina Parakeet.” the only parrot species in the Eastern United States. The Cherokee named it “puzzi la nee” meaning head of yellow. Alas, extinct, at one time the trees and skies were filled with hundreds of their brightly colored bodies, and in flight they formed yellow clouds darkening the skies and shadowing objects below. Unfortunately these settlers also would never encounter the magnificent American Wood Bison hunted to extinction by the mid-1770s. Nor would they have heard the bugling of the glorious Eastern Elk, whose herds had dwindled to such a point that seeing one was a rare occurrence, with the last being shot in Pennsylvania in 1877, declared in 1880. Another subspecies of elk, the Merriam’s Elk, also became extinct at roughly the same time. The ivory billed woodpecker, the 3rd largest woodpecker in the world, once flew in abundance, in old-growth wood forests in North Carolina + 12 other states, romancing the woodlands of the southern US, for decades.  Because of logging and collection the last confirmed sighting was in Louisiana in 1944.  The Carolina Panther once ruled the Eastern coast of North America, primarily along the Appalachian Mountain range from northern Vermont down to Georgia. They were once so common here that many of our mountain ridges, creeks, swamps, and roads were named for these natives, painters, or catamounts. The panther’s population declined throughout the 18th century due to persecution, hunting, poisoning, trapping, loss of habitat and the parallel decline of its major food source – the white-tailed deer. It is thought that by 1900, the Eastern cougar was eradicated throughout North Carolina, and the last documented sighting was one that was killed in 1938.

Carolina Northern Flying Squirrel …..Red Wolf…..Eastern small footed bat…..plus over 239 others are on the Federal Endangered Species list in the Southeast. UNESCO has put the world “on notice” that human activities “threaten more species now than ever before” and that the global rate of species extinction is already “at least tens to hundreds of times higher than it has averaged over the past 10 million years.”  Around the world, an estimated 1 in 4 species of plants and animal groups are vulnerable, which means about 1 million species are facing extinction, some within decades. So how can we help? We can start by reducing our individual carbon footprints, eating less meat, and advocating for change. Check out this list of conservation groups to advocate with:  https://www.treehugger.com/top-wildlife-conservation-organizations-4088567

The Society for Endangered Cocktails (SPEC) have listed these cocktails as endangered: