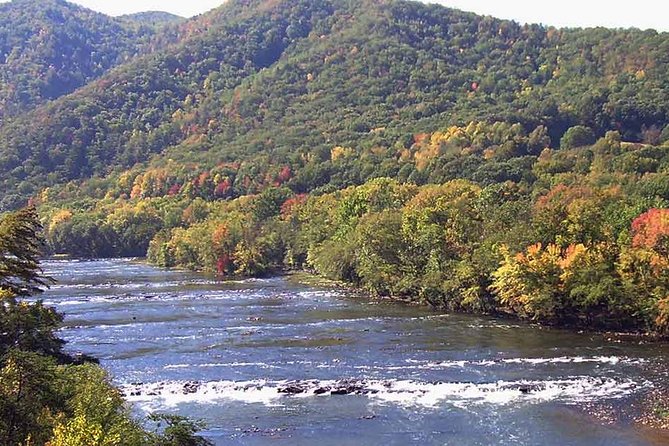 The French Broad River (FBR) is one of the oldest rivers in the world. The Cherokee people referred to the river by different names to reflect its moods: Poelico and Aquiqua (broad in the mtns of its headwaters) Zillicoah (upriver) and Tahkeeosteh (racing waters). Early trail breakers climbing the Blue Ridge Mtns. and viewing the new river, named it French Broad since its broad waters flowed toward the lands and rivers owned by France. Originating in Pisgah National Forest at the foot of the Devil’s Courthouse (standing almost 6,000 feet in the most remote corner of WNC), the FBR begins its journey at its North fork. Another unique feature of the FBR is its beginning with 4 large tributaries that flow from the 4 cardinal points of the compass:  In Rosman the 4 join to create the main stem of the FBR. Certainly, the most unique feature of the FBR is its flow North and West before emptying into the Mississippi, not the Atlantic as you might expect. South of Pisgah this North Fork of the FBR tumbles past Piney Mtn to join the West Fork. After Rosman it flows through fertile bottom lands and receives 2 more rivers: the Davidson and the Little, before it enters Henderson County where the bottom lands become wider, and Mills River joins the course with Mud and Cane Creeks entering from the east. Just south of Asheville the Hominy and Swannanoa Rivers flow into the FBR. At Asheville the whole character of the river changes with its direction turning northwest and instead of fertile fields and a gentle fall, suddenly it plunges between steep mountains in a bed so narrow that there is scarcely room for the railroad that follows where an old turnpike once clung to the passage cut by the river. From Asheville to Paint Rock the river drops 714 ft and receives lots of little mountain streams: Beaverdam, Reems, Flat, Sandymush, Ivy Creek, Hayes Run, Walnut, Big Laurel, Spring Creek and Upper Shut-in. At Paint Rock with its prehistoric petroglyphs, the FRB leaves NC and crosses through Bald Mtn into Cocke Co., Tenn. Flowing almost due west now, it loses it wildness, and is joined by dozens of small feeders. Finally at Newport, the Big Pigeon River again enters the orbit of the FBR. The Pigeon has drained (by a northwesterly course) the whole southern portion of the FBR basin, including 3 of the largest streams heading in the Great Smoky Mtns National Park: Cataloochee, Big Creeks, Coby Creek. Now in the wide Irish Bottoms of Tenn. the Pigeon and FBR come together.  The Nolichucky (by a southwesterly course) has drained the whole northern portion of the basin. The Nolichucky is broadened by large tributaries flowing from Avery, Mitchell, & Yancey counties. From north and south the FBR has now received all the headwaters of its basin, spanning WNC from just below its Virginia boundary to just above its SC line. It soon settles into the 31,600-acre lake impounded by the Tennessee Valley Authority near Dandridge, Tenn. Leaving the Douglas spillway, the river winds across Sevier County receiving Greenbrier Creek and Little Pigeon River from the Smokies high above Gatlinburg. It next enters Knox County and just at the city limits of Knoxville it joins the Holston and they become the Tennessee River. This history is taken from that definitive book on “The French Broad,” well researched & written by Wilma Dykeman.

Wed – 1/12 – 7-9 PM – In the Company of Writers hosts the NC Writers Network guest speaker Kim Nelson. In the Company of Writers presents a series of personal and conversational dialogues featuring guest writers/poets followed by an open mic forum. The Chicago blues music of “Mr. Jimmy,” welcomes you, continues during intermission and closes the evening. The next in the series features Kim Nelson. If interested in reading your work, you may sign up at the door or on line at https://thebrandybar.com/writers-open-mic/