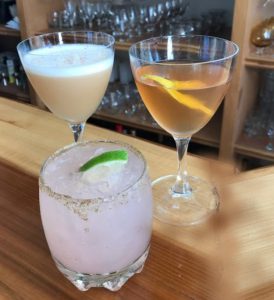 Some have speculated that the Sea Breeze can actually be pinned to the post-cranberry panic of the 1960s. (That remains in question) Yep, cranberries were once controversial. In November 1959, a bunch of berries in the Pacific Northwest were found to contain traces of the herbicide “Aminotriazole,” basically a bog weed killer found to cause cancer in lab rats. The U.S. Secretary of Health at the time advised Americans to avoid cranberries unless you were absolutely sure of their origin. Of course cranberry farmers took a huge hit.
Prior to that time, a little growers’ collective formed in 1930 calling itself Ocean Spray that started publishing recipe booklets to encourage the use of cranberries in all of its solid and liquid forms.
In the 1960s, according to the archives at Ocean Spray, the company began suggesting a cranberry-centric cocktail that included vodka and grapefruit. In the archives are a recipe card and two ‘Cranberry Kitchen’ newsletters that include cranberry juice and grapefruit but not the Sea Breeze specifically,” says Christina Ferzli from Ocean Spray. “From what I can recall, there were many versions of the Sea Breeze cocktail, but Ocean Spray was the one to add cranberry to it.”
As it turns out, that simple 1-2-3 cocktail was actually a ruby-hued riff on something else. “The lack of knowledge of American bartenders meant a lot of recipes got lost or were changed to fit the ingredients on hand,” says Freddie Sarkas, the head bartender at Liquor Lab in Manhattan. “At the same time, we saw the rise of the Cranberry Growers Co-op, which later became Ocean Spray. It marketed an easy drink with gin and cranberry called the Harpoon. That drink would eventually become both the Cape Codder and the Sea Breeze.”
The cranberry-grapefruit-vodka version of the drink is likely credited to a clever marketing campaign by Ocean Spray, whereas, the real Sea Breeze is, in fact, a gin-based invention of that London denizen of cocktail sophistication, The Savoy. Several versions of the Sea Breeze have been developed, including the Cosmopolitan.
So maybe in the past you might have put the Sea Breeze down, or similar drinks, which might make it a good example of a drink that does not boast but one that stands the test of time – a refreshing example of a democratic form of drinking.
1928 Sea Breeze Cocktail – brandy, grenadine, grapefruit juice
1928 Sea Breeze Cooler – apricot brandy, gin, grenadine, lemon juice, club soda
2nd Sea Breeze Cocktail – brandy, cranberry juice, grapefruit juice
Cape Codder – brandy and cranberry juice
Cosmopolitan – brandy, Cointreau, lime juice, cranberry juice
Armagnac & Calvados Flight