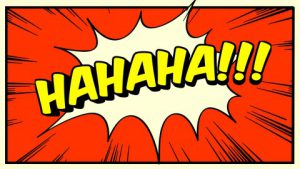 The psychology of jokes: Each single action that a person takes even if it was as simple as telling a joke reflects their unconscious desires and psychological makeup. (That is really deep)  But, contrary to common beliefs, jokes are not only told to make people laugh but they are told to help people satisfy some of their important psychological needs. For instance the childhood memories a person can recall reflects their psychological goals to a great extent and jokes are no different! You can know a lot about the psychology of a person by just knowing about the types of jokes they prefer or by listening to some of their jokes. Here goes:

One night a man walks into a bar looking sad. The bartender asks the man what he wants. The man says “Oh just a beer”. The bartender asked the man “What’s wrong, why are you so down today?” The man said “My wife and I got into a fight, and she said she would not talk to me for a month.” The bartender said “So what’s wrong with that”? The man said, “Well the month is up tonight.” (This of course could go both ways!)

A blind man enters a bar and finds his way to a barstool. After ordering a drink, and sitting there for a while, the blind guy yells to the bartender, “Hey, you wanna hear a blonde joke?” The bar immediately becomes absolutely quiet. In a husky, deep voice, the woman next to him says, “Before you tell that joke, you should know something. The bartender is blonde, the bouncer is blonde and I’m a 6′ tall, 200 pound blonde with a black belt in karate. What’s more, the fella sitting next to me is blonde and he’s a weightlifter. The woman to your right is a blonde, and she’s a pro wrestler. Think about it seriously, mister. You still wanna tell that blonde joke?” The blind guy says, “Nah, not if I’m gonna have to explain it five times.

An Irishman, Englishman and Scotsman go into a pub and each order a glass of brandy. Just as the bartender hands them over, three flies buzz down and one lands in each of the glasses. The Englishman looks disgusted, pushes his glass away and demands another glass. The Scotsman picks out the fly, shrugs, and takes a long swallow. The Irishman reaches into the glass, pinches the fly between his fingers and shakes him while yelling, “Spit it out, ya bastard! Spit it out!”