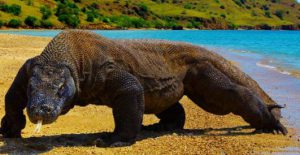 Indonesia is establishing a preserve for the Komodo Dragon on Rica Island, & islanders have been advised that if they decide to stay it will be at their own peril. 10 Facts about the Komodo Dragon everyone should know (Jack Leith-De Graaf, author)

1. Despite their bad rep as vicious man-eating beasts, Komodo dragons are responsible for hardly any fatalities at all. Mortal encounters were documented in 1974, 2000, 2007 and 2009.
2. A Komodo dragon way of smelling carrion is so refined that it can smell something dead over five miles away and pinpoint where it is.
3. Komodo dragons are indeterminate growers, which means that they will never stop growing in length or weight for as long as they live.
4. Komodo dragons are huge eaters – eating as much as 80% of their body weight in one go. To put that into perspective, that’s the same as a person eating about 260 Big Macs in one go!
5. Komodo dragons are venomous and the lore that their saliva contains deadly bacteria is a myth.
6. Komodo dragons are notorious for not being picky about what they eat, including their young. To survive the little ones climb trees and roll around in poop so they smell so bad nothing wants to eat them.
7. President George Bush, Sr. was given a male Komodo dragon by the Indonesian government. Despite the temptation to let him run amok in the Oval Office, Bush Sr. decided to donate him to the Cincinnati Zoo.
8. Komodo dragons experience “parthenogenesis” or virgin births. With no males around, and in lieu of sperm, certain egg cells fertilize each other creating an embryo.
9. Despite being huge beasts weighing up to 198 lbs and 10ft in length, Komodo dragons can run at speeds up to 13 mph when sprinting.
10. Komoto Dragons in captivity are playful and have been seen playing with everyday objects like shoes, shovels, Frisbees and ropes.