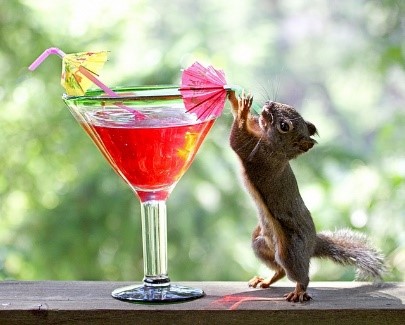 Cocktail Trivia:  The name “Cocktail” has 2 potential sources for the etymology of the word, neither has been verified. (1) During the colonial period, tavern keepers stored their spirits in casks. When the casks got near empty, the dregs, or tailings, would be mixed together into one barrel and sold at a reduced price—poured from the spigot, which was referred to as the cock. Patrons wanting this cheaper alcohol would come in asking for ‘cock tailings.’ (2) In New Orleans an apothecary by the name of Peychaud (of bitters fame) served a mixed brandy drink in a French eggcup. Eventually the drink was named coquetier, the French term for an eggcup. Guests shortened the name to ‘cocktay’ and eventually it became ‘cocktail.’

Other trivia: (1) A well drink is the cheapest mixed alcoholic drink available at a bar. (2) A call drink is a mixed drink for which one specifies (i.e., calls) the exact brand or brands of liquor to be used. Call drinks generally cost more than well drinks. (3) There are three main types of alcohol: isopropyl, methyl, and ethyl. Only ethyl, or grain, alcohol can be consumed by humans. (4) When the word “highball appeared in 1898 (“ball” was a bartenders’ slang for a glass in the 1890s, a “high ball,” a tall glass) it meant a Scotch and soda…but soon “highball” meant any kind of whiskey and soda.  (5) All cocktails are mixed drinks, but not all mixed drinks are cocktails, i.e the basic ingredients of a Gin & Tonic served in a glass is considered a mixed drink, while the application of care (type of gin, brand of tonic, an additional ingredient, etc) makes it a cocktail (6) The 7 Spirits of alcohol are brandy, gin, rum, tequila, vodka, and whiskey. They are each unique and have distinct styles within themselves. (7) “Shot” glasses range in size from 1 to 1 1/4 to 1 1/2 ounces. A “pony shot” (“pony”) is a more precise 1 fluid ounce. A “jigger” equals 1 1/2 fluid ounces.

B & B – Is it a mixed drink or a cocktail? Courvoisier & Benedictine

Sangria special – mixed or cocktail? Or even?