JON THE BRANDY BAR + COCKTAILS ON THURSDAY,  2/20 to celebrate the ancient festival of Mardi Gras. The finder of an object imbedded in our special King cake will entitle the finder to a free cocktail from a list of 5.
Wee bit of history – 1) Mardi Gras is a Christian holiday that dates back thousands of years to pagan spring and fertility rites. Also known as Carnival, it’s celebrated in many countries around the world—on the day before the religious season of Lent begins. 2) When Christianity arrived in Rome, religious leaders decided to incorporate these popular local traditions into the new faith, an easier task than abolishing them altogether. As a result, the excess and debauchery of the Mardi Gras season became a prelude to Lent (the 40 days of fasting and penance between Ash Wednesday and Easter Sunday). 3) Mardi is the French word for Tuesday, and gras means “fat.” 4) The first American Mardi Gras took place on March 3, 1699, when French explorers Pierre Le Moyne d’Iberville and Sieur de Bienville landed near present-day New Orleans, Louisiana. They held a small celebration and dubbed their landing spot Point du Mardi Gras 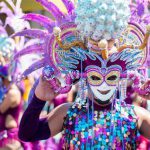