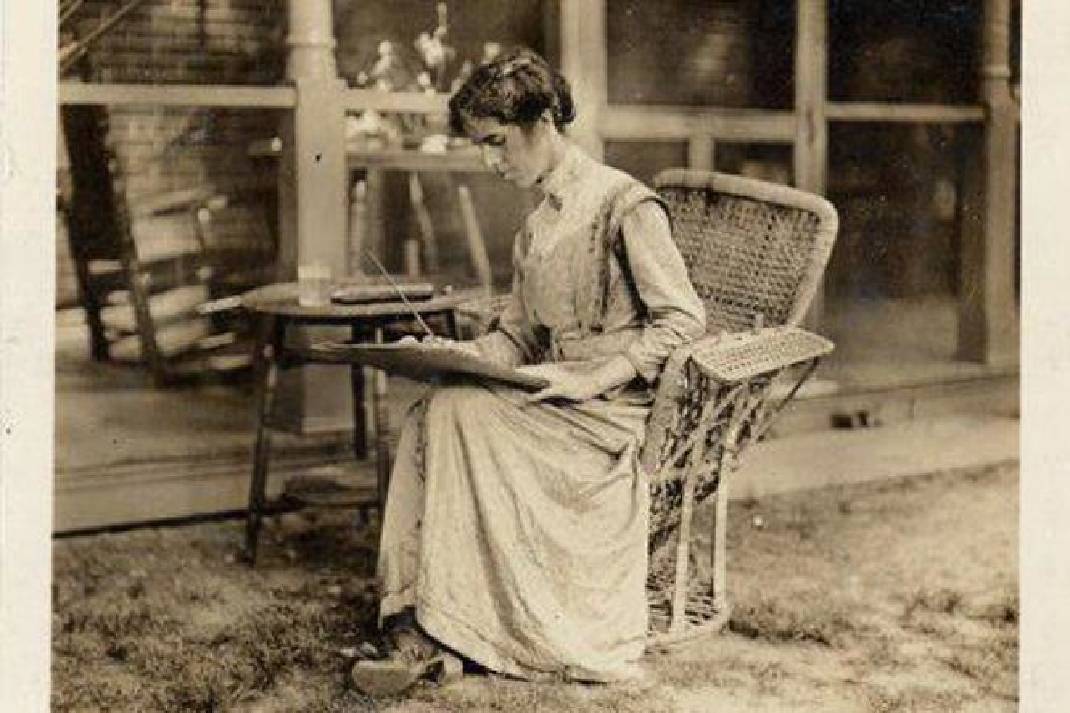 Emma Bell Miles was born in Indiana on October 19th, 1879, to two schoolteachers. The family later moved to Red Bank at the foot of Walden’s Ridge near Chattanooga. A voracious reader she read Pilgrim’s Progress and The Marble Faun before she was 8 years old. She met wealthy friends who saw promise in her, and took pity for her impoverished plight, and sent her to a private boarding school in St. Louis. It is there that she began writing for Harpers Magazine and making illustrations for the magazine. In St. Louis the world seemed surreal to her and she yearned for what she thought was the reality of Tennessee, where she eventually returned. Despite the disapproval of family and friends, she married a native who could not provide, drank and was abusive. But her stories were best sellers in the magazine to which she also added her own drawings and paintings. An intellectual, an artist, and a writer she became popular in the wealthy and socially prominent of Chattanooga. In addition to writing for Harpers, she was a published poet and wrote for Lippincott and Putnam, and regularly for the Chattanooga News. She lived in a tar-papered shack and floated in the divided world between the impoverished and high society.  In 1905 she wrote The Spirit of the Mountains that contained a series of folk stories on the Appalachian people she had lived with and knew personally. An amusing example was the story of a funeral she attended on Walden Mountain where she witnessed: “the shortest and hottest debate outside the church door between a fledgling preacher and the oldest woman of the neighborhood. The young fellow had just delivered a sermon on the apostolic succession, declaring that no one could possibly be saved without baptism at the hands of a preacher of his own particular denomination; he had even named his mother – with respect and with deep regret, it is true, but still he mentioned her—as one he believed to be among the eternally lost on account of this failure to comply with spiritual injunction. Outside the door, after meeting, an old woman faced him, trembling with indignation. “Lishy,” she shrilled at him, unheeding the crowd, “Lishy Robbins! I held you in my arms before you was three hours old, and I cert’ny never ‘lowed to see you stand up in church and preach as you’ve been a -preachin’ this day! Lishy Robbins, me and your mother was girls together; I knowed her all her life and when she died nobody grieved for her more than I did. There never was a better woman or a better Christian in any church, and if she hain’t in heaven today—” The old voice broke,; she gathered herself together and went close to the lad. “Lishy Robbins, you ought to be slapped over for preachin’ any such foolishness about your mother, and I’m a-gwine to do it!” And forthwith she did. Her toil-hardened old fish shot out so unexpectedly that the young preacher went down like a cornstalk. Angry? Of course he was angry, but she was grandmother of the mountains. There was nothing for it but to pick himself up with as much dignity as remained to him; and now that after-years of experience have somewhat mellowed his head-strong humors, he is wont to tell that good story on himself as heartily as if he had ceased to believe in the apostolic succession.”