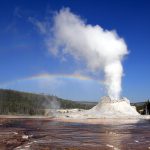 What are the 5 oldest National Parks in the US? (1) Yellowstone National Park, established March 1, 1872, is the oldest national park in the United States and the second oldest in the world. Created by an Act of Congress signed by President Grant, it is located between the states of Wyoming, Montana, and Idaho. The park is home to numerous hot springs and the world’s largest collection of geysers, including the iconic Old Faithful. (2) Established September 25, 1890, Sequoia National Park is located in the southern Sierra Nevada Mountains of California. The park’s natural wonders include Mount Whitney, rising 4,418 meters above sea level. It contains 5 of the 10 largest trees in the world, including the General Sherman tree estimated to be at least 2,300 years old. (3) First placed under deferral protection by Abraham Lincoln in 1864, Yosemite National Park wasn’t officially established as a national park until October 1, 1890. Located in California’s Sierra Nevada, it’s the third oldest and third most visited National Park in the United States. Almost 95% of the park is designated wilderness. (4) Mount Rainier, established March 2, 1899, is an active volcano in the state of Washington, with both Seattle and Portland located within a 300-kilometer radius. (5) Crater Lake in Oregon was established May 22, 1902 and is the deepest lake in the United States. Situated in the crater of a volcano that collapsed over 7,700 years ago, it’s famous for the blue clarity of its water, and with two volcanic islands within the lake.
The best known of all, the Grand Canyon National Park, came later as the 15th park to be designated on February 26, 1919. It is one of the Seven Natural Wonders of the World, and covers 1,217,262 acres. The Canyon is over 277 miles long and over 1 mile deep and 18 miles wide (and getting wider). Coming even later as National Parks go, we cannot forget our North Carolina Great Smoky Mountain National Park. Although the National Park Service wanted a park in the eastern United States, it did not have any money so a Commission was appointed in 1925. Though Congress had authorized the park in 1926, there was no nucleus of federally owned land around which to build a park. However with combined help from private citizens, businesses, and government, lands for the park were finally purchased and established on June 15, 1934.

We will also have kiddie pools set up to cool off your pups and an ice cream truck will set up across the street in our grassy parking lot and shade trees that will offer ice cream for 2 legs as well as 4 legs.

There’s probably more but we forgot.