When Did People Start Saying “Bucket List?”  Google reveals that this is a new term – believed to have first been coined for the 2007 movie “Bucket List” with Jack Nicholson & Morgan Freeman written by Justin Zackham. It probably derived from the Old English idiom “to kick the bucket” which means “to die.” A May 29, 2015 article in SLATE magazine confirms the credit and cites a column in the Wall Street Journal that acknowledges this origination. However, Bucket List was not included in the 5th edition of the American Heritage Dictionary because “it needs a few more years in usage before it proves itself worthy of addition to the big book.” Nevertheless, the term has been frequently picked up in contemporary usage and cultural coincidences.  Such as on Glee, 17-year-old Kurt Hummel, took out his iPhone to make note of the things he intends to do before he dies, one being “arrive at school in a hot air balloon.” Tony DiNozzo on NCIS, shaken by a terrorist attack and worried about his mortality, printed out a list which included “date a Bond girl and/or Miss Universe.”  Doofus Andy on Parks & Recreation listed on his bucket list “winning the lottery, making the best grilled cheese sandwich ever….”.  Well whatever is on your bucket list, come and join us at The Brandy Bar + Cocktails for our “bucket list.”

Reminder we will be open Thurs-Saturday from 4:00 til 9:00 PM  We also practice face masks when entering & leaving and social distancing. Thanks. 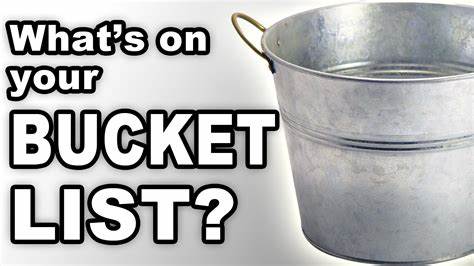