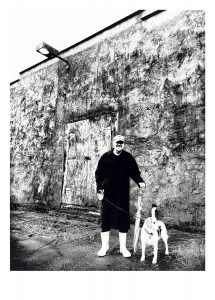 Mark on your calendars the opening reception at The Brandy Bar + Cocktails for Rimas Zailskas on June 21, 2019 6-9p.m.. The exhibit runs through July 31st.  The exhibition is titled “Secret Hendersonville”.  The project began as a person exploration by Zailskas, an inveterate walker, as he navigated the streets and below-grade infrastructure of Hendersonville in search of what he calls “lost places.” Drawn to neglected vine-covered buildings, weather-beaten structures and over-grown winding paths, he encountered both friends and strangers. They also became part of the series.  Zailskas used his iPhone for the majority of the images. “I always have one with me,” he says. Influenced by German Expressionist filmmaker Fritz Lang  in both subject matter and style, Zailskas’ enthusiasm for noir and strange films informs the work.  His arresting images, in high-contract black and white, reveal a less manicured, sometimes gritty side to the city.