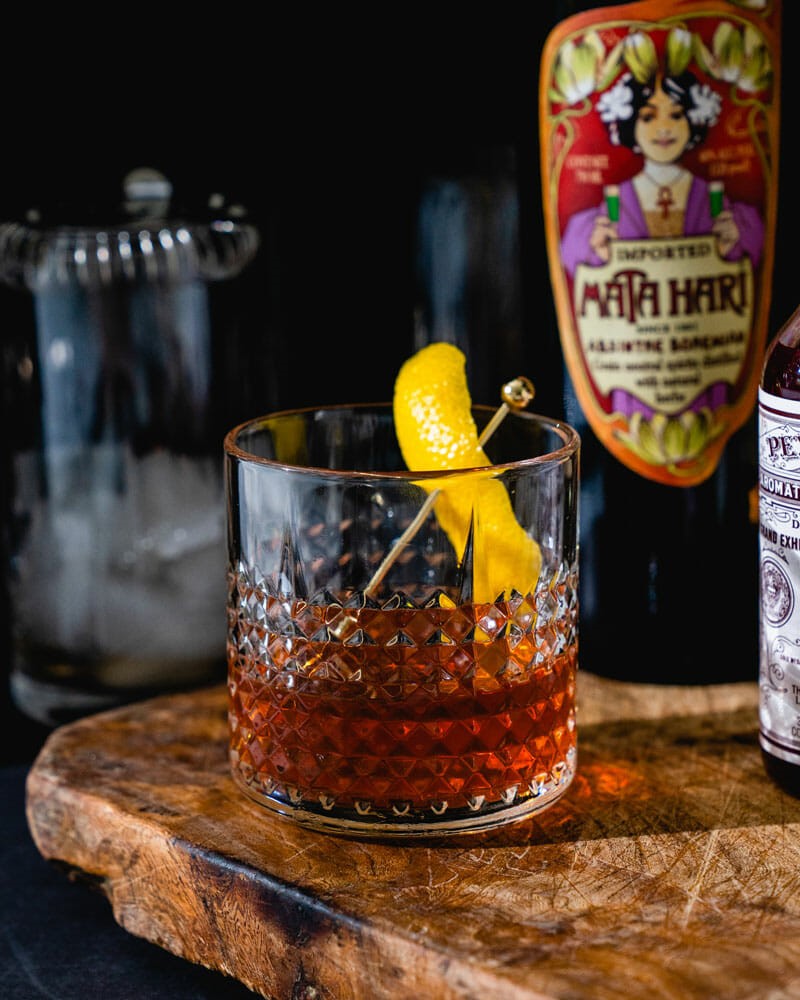 1) The Absinthe Frappe’  invented in 1874 by Cayetano Ferrer, head bartender of Aleix Coffee House, & later became the owner. He renamed it “The Absinthe Room,” now known as the “Old Absinthe House.” A show tune was written about it in the 1904 Broadway musical It Happened in Nordland & one of the verses goes like this:  “It will free you first from the burning thirst That is born of a night of the bowl, Like a sun ’twill rise through the inky skies That so heavily hang o’er your soul. At the first cool sip on your fevered lip You determine to live through the day, Life’s again worthwhile as with a dawning smile You imbibe your Absinthe frappé! It is absinthe, simple syrup, fresh mint, anisette (optional- licorice flavor) & club soda.

2) There’s not much history on the Crux (croo). Its 1st appearance is in Jones’ Complete Bar Guide (1977), now out of print. Stan Jones was a lifelong bartender who worked the bar route in Southern California and collected 4,000 recipes, many of which may have been forgotten, such as the Crux. In the equal parts Crux you get lemon juice, plus the bitter orange notes of Cointreau, and both Cognac and the fortified wine Dubonnet providing a touch of the grape. Clearly, there’s some kind of wizardry involved, because the blend of Courvoiseur, Dubonnet, Cointreau, and lemon juice results in a delightfully balanced & not remotely sweet cocktail. Or, some folks say: “darn if doesn’t taste like Hawaiian Punch” all grown up, holding down some hi-tech job and living in a pricey singles’ loft.

3) The Deauville is believed to be named after the French horse race, “Grand Prix de Deauville,” first established in 1866. In 1872 it was opened to foreign horses. Dating back to the 1930s in New Orleans, it is a well-balanced appley twist on the classic sidecar but not too sweet. The main flavors are apple from the calvados and citrus with the Remy Martin 1738 cognac rounding out the whiskey flavor. This is not a very fruity drink & the taste of the two brandies comes through strongly.

4) Sazerac is the official lowball cocktail of New Orleans! Here’s a boozy classic cocktail that’s one of the greats! If you love spirit-forward drinks like the Old Fashioned, this one’s for you. The exact history is murky but is believed to be invented in the mid-1800s by apothecary Antoine Peychaud. The name comes from the type of Cognac it was originally made with, Sazerac-de-Forge et Fils. Made with cognac, rye (optional),  sugar cube with Peychaud bitters & absinthe that gives the black licorice finish to each sip.

5) The Vieux Carré (pronounced in the Cajun & Creole style voh care-eh) is a classic cocktail straight from 1930s New Orleans. It is a complex & fascinating drink that is as popular today as it was when it was first created. Not one, but two bitters are used and there is a hint of a classic herbal liqueur to give it even more dimension. If you are looking for a truly great cocktail, this is it & it is one of the signature drinks of New Orleans. This cocktail is a short, slow sipper that begins with equal parts of cognac, rye, Benedictine,  & sweet vermouth bitters.

1/2 Price special on US Flight