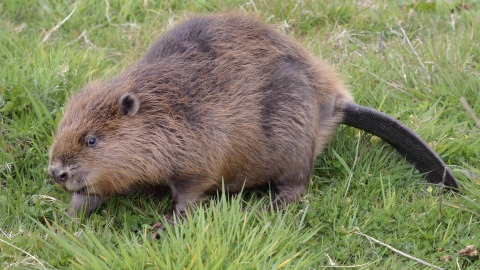 The Beaver Moon reached its peak illumination in the early morning hours of Friday, November 19th at 3:59 AM EST. If you noticed it was pretty close to full the night before on Thursday just after sunset. The Beaver Moon is given the name since beavers typically start building their winter dams in November and preparing for winter. Another interpretation is that November was the time to set beaver traps before the swamps froze to ensure a supply of warm winter furs.

About the beavers in Henderson County, there is a story by Frank Fitzsimmons in his book “On the Banks of the Oklawaha” (local name for Mud Creek). According to Fitzsimmons, the beavers had disappeared from Henderson County because of excessive trapping for their hides. To see one was a rarity. The NC Wildlife Commission decided to relocate beavers into the counties in an effort to bring them back to their native habitats with protected status which they still have today.  The Commission sent out notices to residents and businesses offering to deliver a pair of bearers for those interested in participating in the program. Our local hero Frank Bell operated camps for boys and girls in the Green River area. He loved to introduce campers to experiences with nature and its wildlife. Frank Bell is an interesting person for a good story of his own, having taken a group of boys down Mud Creek and into the French Broad River as they made their way to the Mississippi River a month later. But back to the beavers. Bell also decided to introduce his campers and counselors to probably their first sight of a beaver. He ordered a pair and placed them in cages on the river for the campers to experience. One day he received word that the cages were empty and no sighting of the beavers. After a couple of years there were reports of water backing up in some of the streams feeding into the Green River. There was also news by local residents of sightings of animals that looked like beavers. All evidence suggesting that the beavers had adapted very well to their new surroundings and time for raising a family. Thus, if you have beavers on your creeks, rivers, or lakes, and you love them, then give praise to Frank Bell, but if you find them a nuisance then blame Frank.