In 1525, 365 years before Giovanni da Verazzano sailed along the coast of present day North Carolina and established a French claim to the area, construction had already begun on Notre Dame de Paris (meaning Our Lady of Paris). The French were not particularly impressed with the area since it lacked any of the gold or silver they sought. A year later the Spanish under Vasquez de Ayllon entered the scene and established a small settlement at Cape Fear that failed because of disease and lack of food. Not to give up, Spain, led this time by Hernando De Soto in 1540, marched from the South into the western North Carolina Mountains but no permanent settlements resulted. It was not until 1663 that King Charles II rewarded eight of his most loyal supporters by making them “lords’ proprietors” of Carolina that ushered in the rule of the British.
In 1160 Bishop Maurice de Sully began the Notre Dame Cathedral which was largely completed 100 years later in 1260, though it was modified frequently in the following centuries. The cathedral is considered to be one of the finest examples of French Gothic architecture with its innovative use of the rib vault and flying buttresses. Because of the stability of the flying buttress, according to Art Historian Andrew Tallon, the upper part of the cathedral “has not moved one smidgen in over 800 years.”
French cocktails commemorating Notre Dame:
French 75 – Brandy, lemon juice, and champagne
Rose Cocktail – Vermouth, Cherry Brandy, Chambord
Sidecar – Brandy, Cointreau, lemon juice
French Martini – Brandy, Chambord, pineapple juice
Remy Martin 1738 Cognac – King Louis XV presents an awards of excellence to Remy Martin which inspires their creation of the cognac “1738” 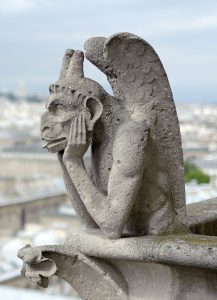