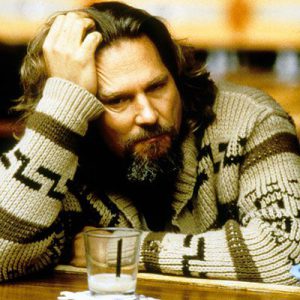 1 -Casino Royale – Sir James Bond – David Nevin – The Martini (Brandy, sm. amt. of gin to balance & Vermouth). James Bond is the quintessential Martini man. In Casino Royale, agent 007 instructs a bartender shake it very well, until it’s ice-cold, then add a large thin slice of lemon peel. Bond named the cocktail the Vesper in honor of a woman he would come to love (despite her betrayal), lose and pine for. Much like the femme fatale for which it is named, a true Vesper is sadly gone from the world & impossible to resurrect today, so we have substituted an Italian herbal vermouth in lieu of usual dry.
2- The Blues Brothers – John Canady – The Orange Whip (brandy, rum, orange juice & cream). Three Orange Whips! declares John Candy’s character in the famous film The Blues Brothers, right before the major fund-raising scene. Following its film debut, the cocktail experienced a huge resurgence in popularity. Hey, if the brothers blue think it’s cool, we can’t argue with that.
3- The Big Lebowski – Jeff Bridges – White Russian (Brandy, Godiva white chocolate liqueur, cream). In the late ’90s, The Big Lebowski, starring Jeff Bridges, John Goodman, and Steve Buscemi, became an instant cult classic. “The Dude,” Jeff Bridges’ character, was defined by his shaggy sweater, long locks, dark sunglasses, and strong preference for White Russians, a velvety cocktail. If he wasn’t drinking one, he was carrying one, finishing one, or finding ways to make one in other peoples’ houses.
4- Bonfire of the Vanities – Bruce Willis – The Sidecar. A classy drink for a classy film! In the movie, a character who isn’t supposed to drink finds himself at a meeting with Bruce Willis’ character, Peter Fallow. In the absence of his wife, who would never let him drink, the man orders a Sidecar. The classic cocktail, which contains cognac, orange liqueur and lemon juice, is still one of The Brandy Bar’s most popular drinks.
5- Casablanca – World War I French Artillery Gun – French 75 (cognac, lemon juice, topped with Champagne). Three parts signature bite, one part sugar, this drink is bittersweet — just like the ending of the classic film. Named for a French field artillery gun used in World War I, this cocktail is all attitude. Think this is your cocktail of choice? “Here’s looking at you, kid!”
6- Sex And The City – Parker/Davis/Cattrall/Nixon –Cosmopolitan (Brandy, Cointreau, lime juice, cranberry juice). So many drinks were consumed during Sex and the City’s run on TV and the big screen. The long-running show charted the four main characters’ of Sarah Jessica Parker, Kristin Davis, Kim Cattrall, and Nixon’s experiences trying almost every trend in drink, dining, fashion, and men. Yet one constant remained: the cosmos.
7- Some Like It Hot – Marilyn Monroe – Manhattan. Sure, men have cross-dressed in newer movies than Some Like it Hot, but those films don’t have mobsters, jazz music, and Marilyn Monroe. This heady mixture can only be matched by the film’s standout drink, the Manhattan, with its equally stiff combination of sweet vermouth, whiskey (substitute brandy), and bitters. Top it off with a maraschino cherry for the ultimate unisex cocktail.
8- Lost In Translation – Bill Murray – Suntory Whiskey, we substitute -Clear Creek Apple Brandy neat or with ice. What time is it? “Suntory Whiskey time,” declares a mildly depressed Bob Harris (played by Bill Murray) in Sophia Coppola’s Lost in Translation. Harris spends a few hilarious moments doing a commercial spot for “Suntory Whiskey” during his stay at a quirky Japanese hotel. Sullen and sensitive, the gentleman seeks comfort — in the form of whiskey — at the bar while suffering from a bout of insomnia. Luckily, he meets a girl who also suffers from lack of sleep. Cheers!
Saturday 6/29/19 8:00 – 9:00 PM – The Sunlight Drive – a guitar duo of Mike Vilenski and Jim Burgard. The two players met at a Round Robin style Open Mic, hosted by Letters to Abigail. After some gentle nudging from Kelli, they decided to form their current duo, Sunlight Drive, playing a mix of Americana, Blues, Folk and Classic Rock songs spanning the 60s thru today.
Secret Hendersonville Lost Places/Curious People, an exhibition of photography by Rimas Zailskas continues through July 31st.