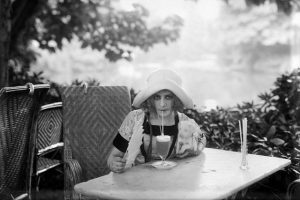 America’s “Daisy Cocktail” was the first sweet-sour drink years before the “Marguerita.” According to our national authority – Google- “margarita” is an easy translation of “daisy flower.” This in turn leads you squarely to the “Daisy Cocktail,” that wonderful citrusy brandy drink we serve at The Brandy Bar + Cocktails. The recipe dates back to the 1920s and the recipe calls for brandy, citrus, orange, and club soda, thus making it a category that Tequila will later copy.
“The Margarita is just a twist on the Daisy, subbing in tequila as the main spirit,” says Philip Dobard, the vice president of the National Food & Beverage Foundation. “A lot of things were happening during Prohibition, and Americans were going to Mexico and trying tequila for the first time. Before that, it was unknown here.” He also notes that if you rummage the pages of cocktails pre-1940s you will probably not find many mentions of Tequila.
If you do find a reference, it’s in exotic terms, such as in Charles “Ramblin’ Man” Baker’s 1939 article “A Gentleman’s Companion,” in which Baker proposes it for drinks like the violently named Mexican “Firing Squad” Special. “This drink is based on tequila,” writes Baker, “[a] top-flight distillation of the maguey plant.” The cocktail employs the spirit along with lime, grenadine, gomme syrup and bitters. But the Tequila-sour-sweet part of his combo wasn’t really too far off and others seeking a finer cocktail were refining the sweet-sour mixture even further.
Cocktails like the Sidecar and Kamikaze all fall into the Daisy format, which is “two parts booze, one part Cointreau [or generally orange liqueur] and three-quarters lemon or lime juice,” says bartender and the co-owner of Brooklyn’s Leyenda, Ivy Mix. “You can mess around in that format, but it will still probably taste pretty good.”
So for Thursday’s one-half price off specialty cocktails, we have chosen the “Daisy Cocktail” as our star and built around it. One will be a new one – the FloraDora- which, if everyone likes, we might add as a permanent.
Brandy Daisy – Brandy, rum, orange bitters, lemon, soda (substitute champagne for $1)
Brahmakazi (we have taken the Kami out) – Brandy, Cointreau, lime juice, club soda
FloraDora – Brandy, raspberry juice, ginger juice, lemon juice, club soda
Pit Stop – Cherry brandy, Amaretto, lemon juice
Sidecar – Brandy, Cointreau, lemon juice
Your choice of fruit infused brandies as a straight pour: Peach, apricot, honey, blackberry, or vanilla.