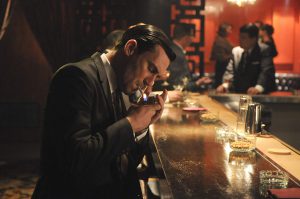 For most people, the old-fashioned is the bar standard, and it’s been around a lot longer than Don Draper’s (the fictional character in Mad Men, who knows advertising and whiskey and whose favorite drink is the Old Fashioned). In fact, bartender lore says the name comes from people ordering a cocktail the “old-fashioned” way. But just how old-fashioned is this drink? Here’s a short, sweet history of one of the world’s greatest cocktails.
1862 – A book entitled Jerry Thomas’ Bartenders Guide: How To Mix Drinks is published, giving instructions and recipes from the early days of bartending. This book contains a recipe for an Old Fashioned Holland Gin Cocktail: “Crush a small lump of sugar in a whiskey glass containing a little water, add a lump of ice, two dashes of Angostura bitters, a small piece of lemon peel, one jigger Holland gin. Mix with small bar spoon. Serve.”
While the drink has the namesake and similar elements of the modern old-fashioned, Thomas’ recipe doesn’t call for whiskey and it’s never mentioned in any of the proceeding articles.
1880 – The story starts in Louisville, Kentucky. A 2005 article in The Courier-Journal gives credit to a private social club, called The Pendennis Club, for making the very first old-fashioned. James E. Pepper, bartender and esteemed bourbon aristocrat, was said to have invented the drink in Louisville, before he brought the recipe to the Waldorf-Astoria Hotel bar in New York City. This is supposedly where the old-fashioned was born.
February 15, 1880 – The Chicago Daily Tribune publishes an article announcing that Samuel Tilden, the 25th mayor of New York and former Democratic candidate for the U.S. Presidency has withdrawn from the United States Presidential election. In this article, the author mentions how Tilden’s withdrawal was met: “Hot-whiskies, Scotch and Irish, particularly the latter, sour-mashes, and old-fashioned cocktails were drank in honor of the event.”
1895- Modern American Drinks , written by George Kappeler, is published in the U.S. and lists a plethora of recipes, one of which being for an Old Fashioned Whiskey Cocktail, reads as following: “Dissolve a small lump of sugar with a little water in a whiskey-glass; add two dashes Angostura bitters, a small piece of ice, a piece of lemon-peel, one jigger whiskey. Mix with small bar-spoon and serve, leaving spoon in glass.”
Skip to 2019 – So as above noted, and as cocktails go, you can’t get more classic than the Old Fashioned, a simple concoction of bourbon (or in our case brandy), sugar, water and bitters. Good versions of the drink can be found all over the world. But simple tweaks—brandy here, smoke there, tamarind elsewhere—can easily change up the classic into a new favorite. We tracked down 6 unique riffs at bars and restaurants around the country that have modified the “old fashioned” into various personalities to reflect our diverse communities’ tastes.
Don Draper’s Old Fashioned – Copper & Kings American Brandy, sugar (just enough sugar to cut the burn) club soda
Bart’s Old Fashioned – Copper & Kings American Brandy, oranges, cherries, sugar, bitters
Espresso Old Fashioned – Laird’s applejack, absinthe rinse, Peychaud’s bitters, espresso
Benton’s Old Fashioned – Fat-washed Copper & Kings American brandy (bacon fat), maple syrup, angostura bitters
Estate Old Fashioned – Brandy, rum, bitters, club soda
Freehand Old Fashioned – Brandy, pineapple juice, simple syrup, coffee liqueur, Angostura bitters, orange bitters